Tomb of The Serpent Kings Part 9

After their last delve into the Tomb of The Serpent Kings, the party was flush with silver and confident that they had explored almost all of the long-forgotten underground complex. Yet after unintentionally releasing a succubus into the world, the party was not in any great rush to return.

Six months went by and winter had arrived at Bebbanburg Keep. The adventuring season was effectively over. But the costs of living in the Keep, and the party’s own excesses, had piled up quickly. The first snow of the year was on the ground and the party found itself in debt to the Merchant Guild Bank with no way of paying for food or rent in the coming weeks.

[DM Note: In previous sessions, we have been rolling on the WTF Did I Do Last Night carousing table collectively, but the first result sounded specifically personal so all six Players rolled individually this time. Maul the dwarf avoided contracting a venereal disease only by the grace of his dwarven fortitude, while Sister Cletus had a nonspecific but nonetheless disturbing romantic encounter with a pig. The halfling mage Belladonna awoke one morning in a stranger’s house wearing her gambison . . .and nothing else. The ranger/thief Farcaan spent three days in the stocks on a charge of drunk and disorderly, while both the mage JD and fighter Eefje found themselves paying steep fines for various run-ins with the authorities in charge of maintaining order in the Outer Baily.

There was also the mundane cost of living (10sp/week x Level), and a payoff to the father of Kit the lantern bearer who was cut to ribbons by a brutal blade trap.]

With no honest way of earning coin, the six adventurers set out one last time for the Tomb of The Serpent Kings. Not for fame and glory this time, but just to pay their bills.

Entering once again by way of the hidden path below the roots of a gnarled old tree they moved down into the Goblin Warrens. They spent some time sifting through the muck of the Goblin Farm where they recovered a handful of stinking coins and eventually had an encounter with the tentacled mushroom creatures they had fought the last time they were here. The creatures remembered the party well and backed off cautiously. The party decided to leave the area rather than pursue them. Mushroom monsters rarely yielded any treasure worth having. Before leaving though the two magic users gathered a sack full of the blue mushrooms know as dungeon cucumbers. The Witch had told them they were useful for curing paralysis and ordered them to recover some samples.

Heading north the party entered the Basilisk Hall as quietly as they could, ears alert for any sign of the creature that had been such a problem for them on previous visits. But the hall was unnaturally quiet. No heavy breathing in the dark. No clink of chains being dragged across the stone-flagged floor. Now more alert and paranoid than ever, the party hugged the south wall and scuttled westward.

A figure began to resolve itself at the edge of the party’s torchlight. It was broad-shouldered, wielded a heavily notched blade, and blocked the passage leading west. As it raised it’s head the veteran members of the party recognized their old adventuring companion, Alonzo Machete! The horrible wound that had ended his life, splitting him open from collar to crotch, had been crudely sewn closed with thick hempen twine as thick as a finger. On a chain around his neck hung a cold-iron key. Black ichor seeped from his ghastly wounds and an unearthly voice, like the howl of a tormented spirit, forced its way past his stiff and desiccated lips.

A great wind as from an unholy crypt swept through the hall creating a horizontal dust devil as a spooky light began to glow behind the party’s former comrade. The thing that had been Alonzo screamed like a banshee, the sound visibly distorting the air before it. The stone floor buckled and cracked as five skeletal warriors clawed their way out of the ground. 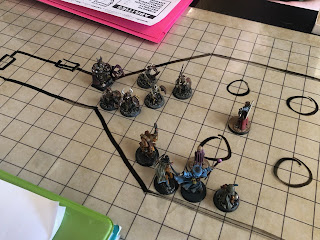 The party was dumbstruck but had the wherewithal to sheath their blades and those who had them unhitched maces from their belts. This was not their first skeleton dance. Apparently ready for anything, Farcaan launched her grapnel hook at the key around Alonzon’s neck and by some miracle [a Natural 20] snagged the key and ripped it from its chain.


Undead Alonzo unleashed a flurry of blows upon Maul and Eefje, but the two warriors kept up a solid defense and emerged unscathed. Cletus moved out into the open wielding a holy relic and invoked her patron, St. Thomas. Three of the skeletons exploded instantly. Knowing that her elven bow was useless in this situation Farcaan readied her trusty shovel as the mages began preparing spells.

Combat got crazy. Belladonna cast Summon Cube under Alonzo, dropping him into a deep pit while JD opened a portal to hell engulfing several of the skeletons in an acidic miasma that drove one of them into a killing frenzy against one of its own. Undead Alonzo clawed free of the pit and summoned more skeletons with his unearth howl. Another pit appeared beneath his feet. A Web spell was hurled at his face to stop him summoning more. Effje dispatched three skeletons at once in an explosion of violence that left the rest of the party stunned.

Finally, as Undead Alonzo tore the sticky webbing from his face and began clawing his way out of the pit again, Maul, Effje, and Farcaan (armed with her trusty Spade of Smashing) dogpiled onto him and beat him to death. A second death. Killed him dead for sure again! 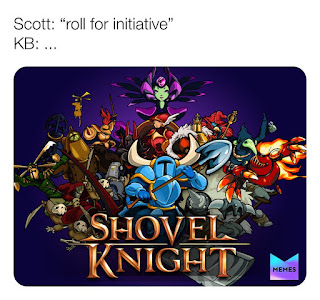 [DM Note: this fight was an inadvertent cakewalk for the party, though the Players were certainly freaked out by the reappearance of Alonzo and the drama it evoked at the table cannot be understated. So definitely a success on that count. The combination of clever spells and naked violence showed me that I will definitely have to up my DM Tactics game if I wish to inflict actual damage on the party in the future. A few skeletal archers or a couple of flying monsters would have dramatically changed how things worked out.]

The party was fairly certain that the key they had recovered from Undead Alonzo would open the locked treasure vault at the other side of the dungeon. But the unexplored territory was near to hand and they could not resist. Ahead of them lay two doors. A mundane stone door in the north wall and a door to the west carved to resemble a multitude of entwined snakes. One of the snakes was missing. JD had a small stone snake recovered several delves earlier in his pack. Without hesitating he fit the small carved serpent into the door which immediately became animated and slithered up into the ceiling, revealing a musty old throne room lit by eery purple lights. The walls were a red marble laced with gold and carved to resemble the scales of a snake. The throne was constructed for someone much larger than a human. 8 small mirrors of exquisite craftmanship were arrayed around the throne, reflecting and multiplying the purple light. Obviously, they stole these.

Perhaps unwisely, JD pulled himself up onto the throne despite the protests of some of the other party members. For a brief moment, he felt an unquenchable desire to rule over others and dominate all the land! In his mind’s eye, his trusted companions suddenly looked weak and malleable -potential minions to do his bidding. And then it passed.

[DM Note: save vs Mind Control or desire lordship or conquest.]

It did not take Farcaan long to discover a secret door in the north wall. It did take some time for Farcaan to muster the courage to open it, enter the small chamber behind the door, and then open another secret door leading to a large Ingredient Storage Room beyond.

Eventually, though, the brave Shovel Knight crept quietly into the storage room where she marveled at the wealth she saw represented before her. She also heard absent-minded humming coming from an adjacent room and froze in her tracks. The stealthy halfling Belladonna padded up to ask what was taking Farcaan so long and promptly knocked over a crate containing fragile glass vials. The noise was incredible. The humming stopped immediately.

The rest of the party rushed into the storage room to see what was happening just as a massive figure bent itself to enter from the adjacent room. It looked like a dried human corpse (with fangs) fused to a snake’s tail at the waist and wearing tattered ancient robes. His eyes were red pinpricks.

“Hello, bipeds,” said the eight-foot-tall immortal snake-man wizard. He then introduced himself as Xiximanter, Wizard Supreme to his Exalted Emminence, Emperor Xaxiss.

While the party’s level of anxiety spiked back up to Undead Alonzo levels and stayed there the entire time, they quickly figured out that Xiximanter was nuts. As far as he was concerned the Snake-man Empire still flourished on the surface world and these bipeds were barbarians visiting from the provinces. He asked for news and yarn was spun by the non-snake-people about how well things were going for the Empire. He casually tried to buy the magic users from the party (for his immortality experiments) and offered to pay well for any humanoids they might bring him in the future. He showed them his fungal-goblin experiment and complained about what poor test subjects goblins made.

There was one very tense moment when Xiximanter insisted on “validating” the party’s passes. The party had found serpent amulets months earlier that apparently acted as permission to be in the Tombs. Passes to Disney, if you will. Unfortunately, they only had enough for half of the party. Before Xiximanter could devour those unfortunate enough to not possess an amulet the party went on at great lengths about something called a “Groupon” that was a new fad in the empire. It allowed two guests to share a single amulet.

After some more very awkward small talk, the party departed with promises to return bearing spell components and victims for Xiximanter and made their way unmolested to the locked treasure vault that had thwarted them so many times before to loot the last bits (?) of treasure from the Tomb of The Serpent Kings.

[DM Note: And that was how we ended ToTSK! Many thanks to Skerples of Coins and Scrolls for writing ToTSK, and to James Young of Ten Foot Polemic for his excellent carousing and emergent backstory tables. You guys were instrumental in the fun we had at the gaming table these past months.

Tomb of The Serpent Kings -Part 1